Democracy: what is it ? where does it start? 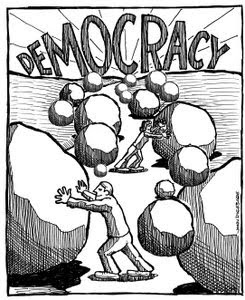 The idea of democracy is said has started during the Greeks in the six century BC. It derives from 2 base Greek words which are 'demo' means the people and 'kratein' means rule by the people. So just looking briefly to the meaning, i believe that all of us should have sort of understanding of what it could mean.

The Greek ruled their territories under the system of democracy. dividing their civilizations into small city-states and all the men voted on all issues of government.
a well-known quotation that well represents democracy is 'a government of the people, by the people, for the people'

This is kind of some history lies behind the introduction of democracy.
i Would say mahathir's new post is one of the best way to explain the good and bad about democracy and of course he's referring his idea to what is currently facing by malaysia.

read this, i suggest to you
well maybe this is gud for you too ;)
Posted by Ainne at 7:52 PM